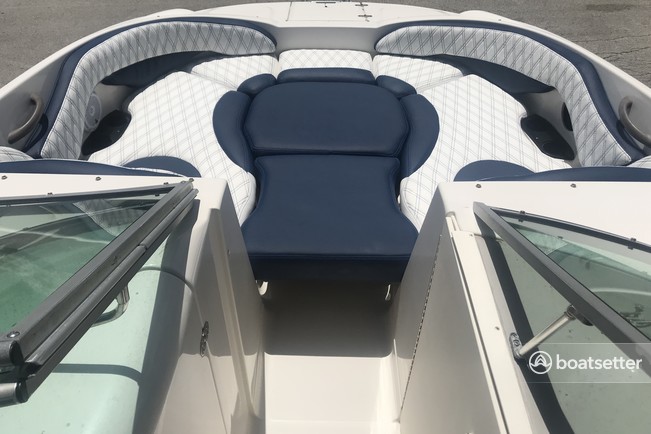 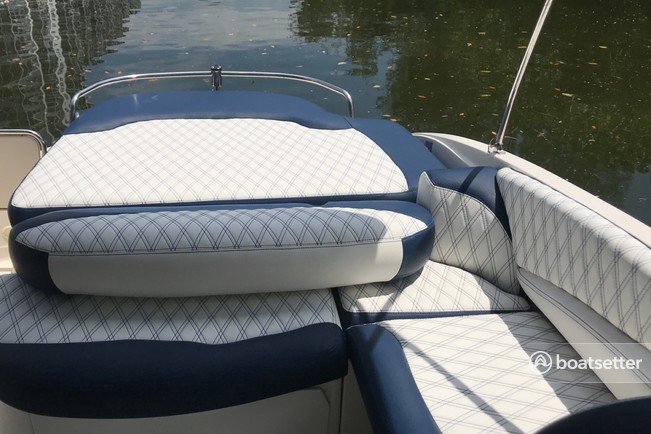 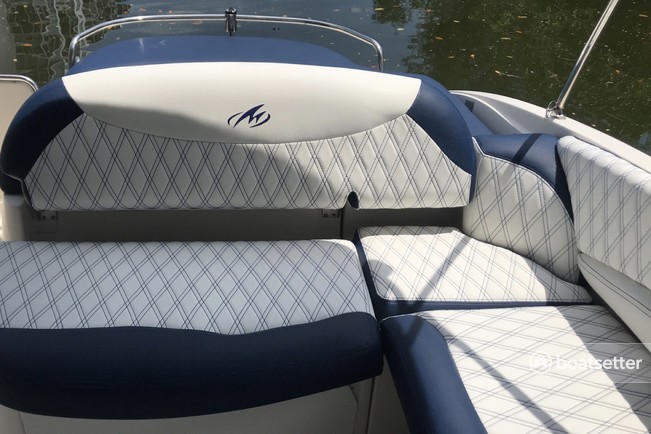 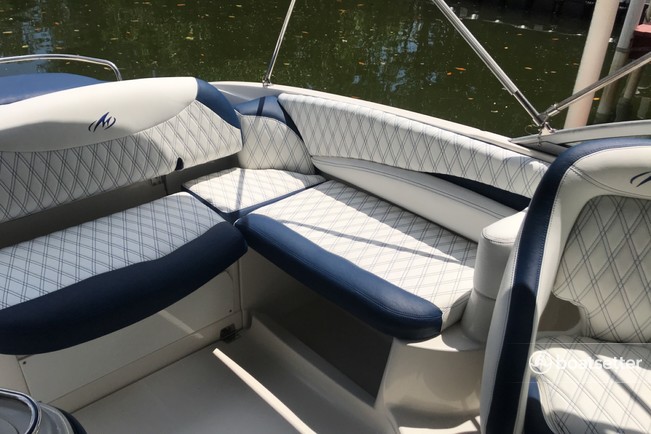 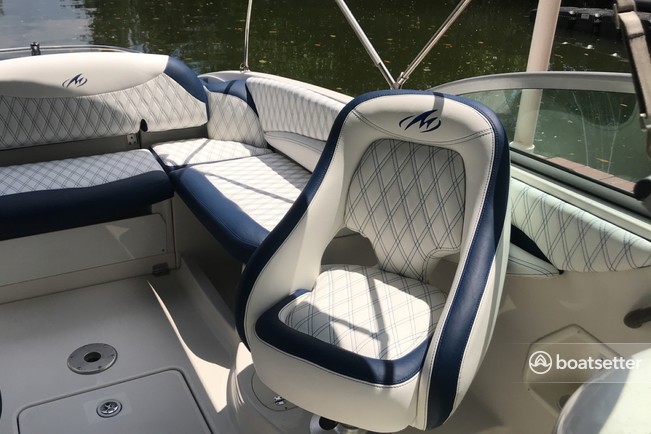 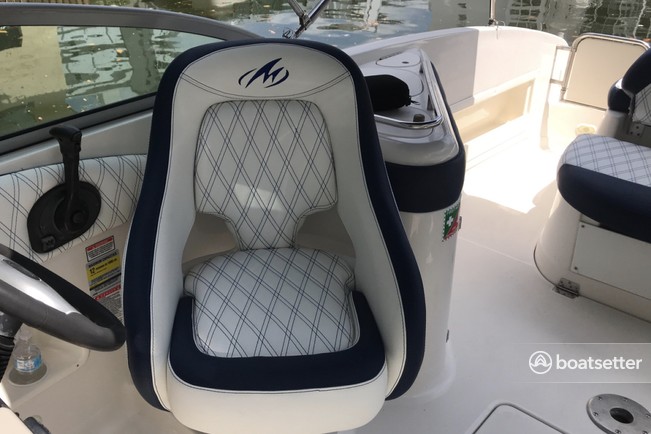 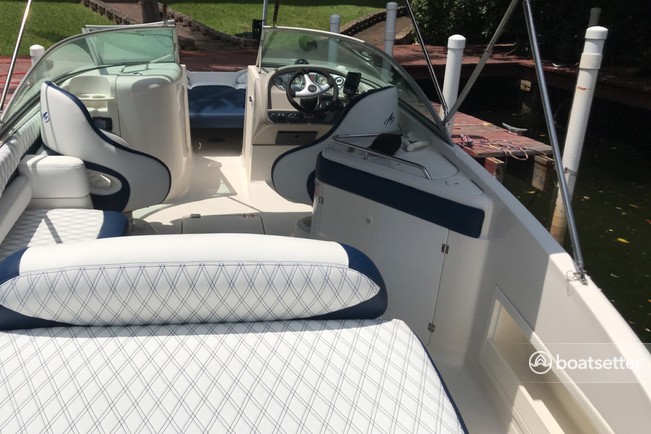 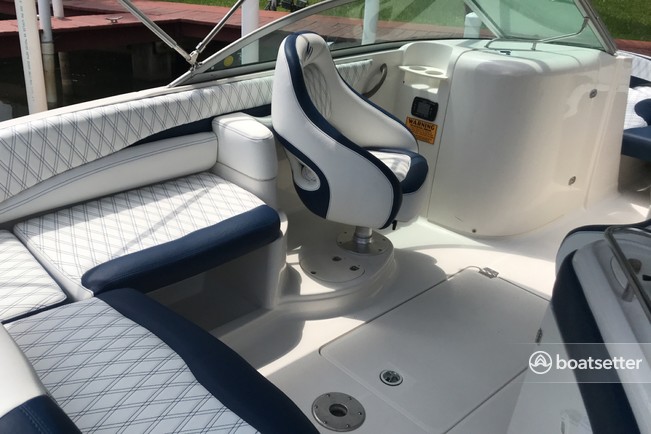 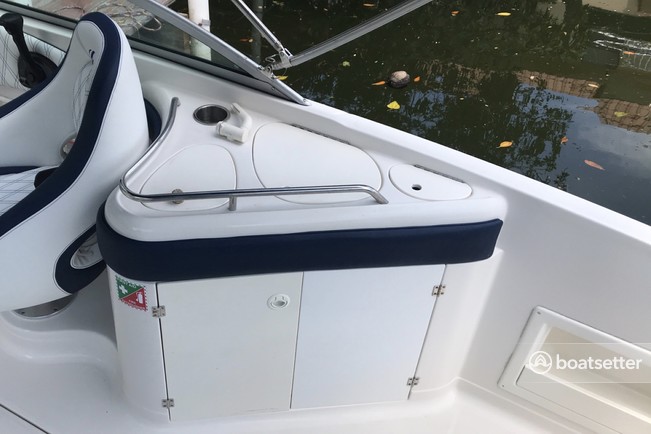 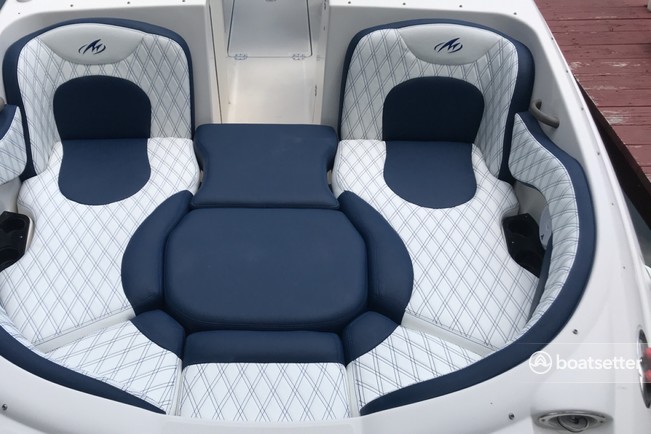 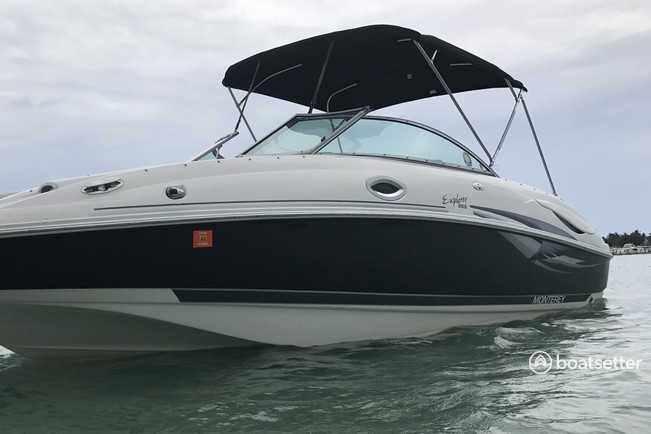 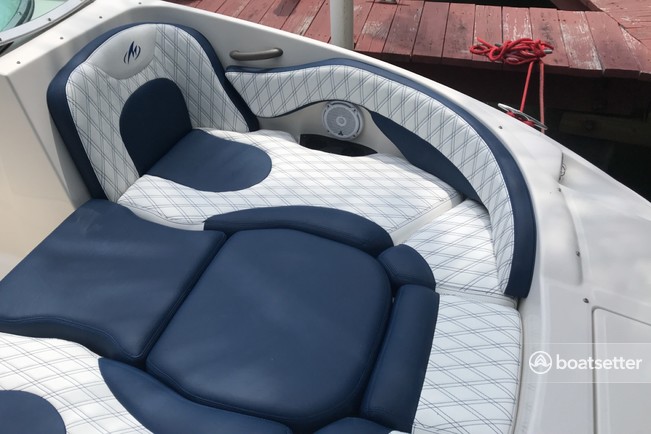 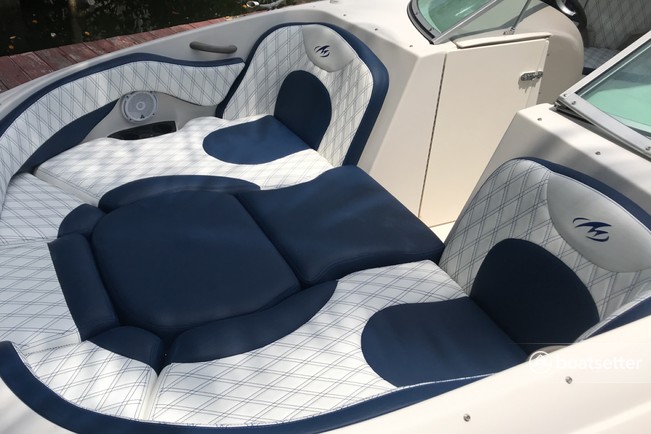 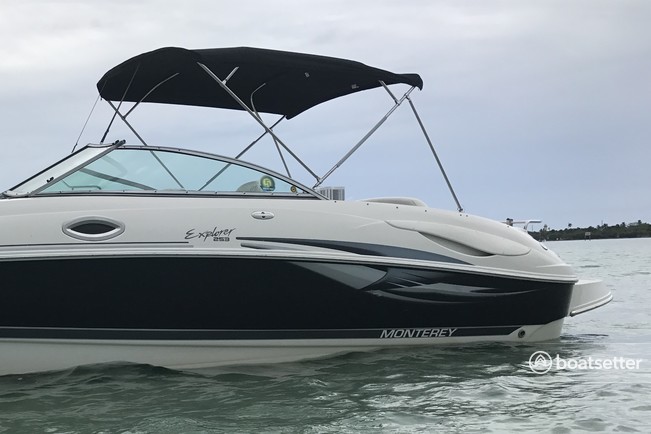 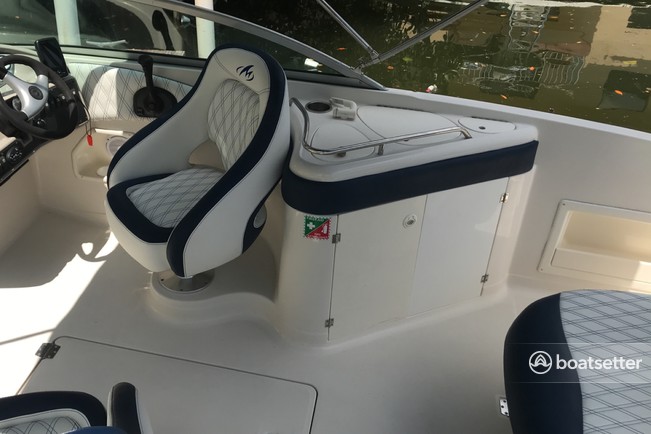 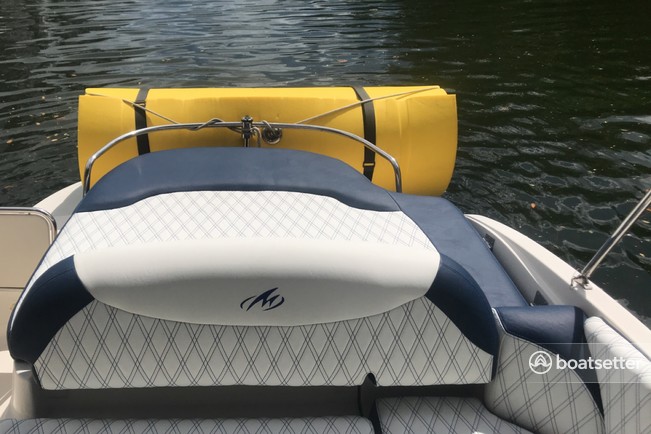 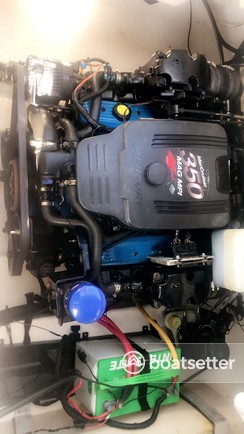 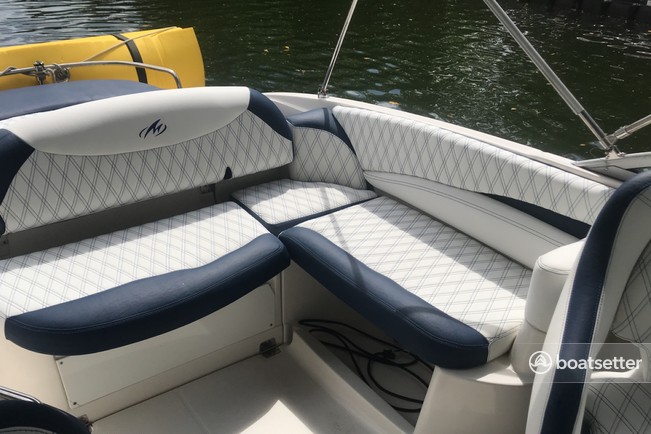 This boat is rented with a captain. The renter will not operate the boat.

Please select your booking option. All fees are shown at checkout.
Captained

Exact location information is provided after a booking is confirmed by the owner.

Service First; Our mission is to provide all of our customers the best service, experience and value by offering a variety of recreational boating opportunities in a clean safe reliable craft and to do it better than anyone else. -ARBOATRENTALS LLC.

We had a great time on the boat. Gf’s sister was in town and we took her out exploring the sandbar and raccoon island.. would definitely recommend

Reinier is very responsive, helpful, and kind. Captain Oscar was relaxed and professional. Everyone had a great time! Would book again... :-)

We had such a great time. Thank you for everything!

We had a great time on the boat. Gf’s sister was in town and we took her out exploring the sandbar and raccoon island.. would definitely recommend

Reinier is very responsive, helpful, and kind. Captain Oscar was relaxed and professional. Everyone had a great time! Would book again... :-)

We had such a great time. Thank you for everything!

We enjoyed the trip, but were very surprised when we were charged for gas at the end of the trip. Not only was that a surprise to me (always read the fine print), but the way the charge it is totally arbitrary. Boats don't have a clear gauge and it was basically a guess. I am not against this, but since I didn't factor it in the boat, which was pretty old, with ripped seats and all, was more expensive that expected.

Great host, great captain! Very nice people! We had a great time on board!!

Reinier is extremely amazing! He went over and beyond before booking answered my all questions to make my first booking a breeze. The captain Tony was so sweet and fun! We had a great time for our bachelorette party! Can’t wait to book with them on our next trip!

Reiner was very responsive in communications and a pleasure to deal with.

He is professional and courteous and was sensitive to our needs. He has many boat options and trips to choose from and his pricing is fair.

Captain Tony was great company for the 9 girls he took out to sea.

We had a great time with Captain Tony on our trip for a bachelorette party to Miami! He was very accommodating to where we wanted to go and what we wanted to do. He even adjusted our original plans to change from a sandbar to an island when it ended up being really windy - and it was perfect. We were able to relax and be out of the wind. He also took us on a little trip to see the coastline.

Reinier was very responsive throughout the process to all of our questions. The location of where we boarded was easy to find and the boat was very clean. We comfortably fit 6 people with room to spare. I would recommend them to anyone who is looking for a nice time on the water.

Reinier and the captain provided outstanding service during my bachelorette day trip. We all had a blast. Would definitely rent a boat with them again and highly recommend!

We did not have a good time renting through Reiner. Few reasons why:
1. Reiner followed up the week before our rental to move us from an 11am departure to a 10am departure. I understand he wanted to rent out the boat twice on saturday so I don't mind that. We had plans in the morning and were unable to move our departure time earlier. He didn't make us move so that was a +1 for him, but it was annoying.
2. The morning of the trip, I get a call from him and he lets us know that the boat we rented was no longer available, but he had a back-up boat for us. The whole thing seemed a little bit sketchy because he claimed the boat was broken, but only waited to call us the morning before. The replacement boat was much worse than the boat we had rented and barely fit all of us. Even the captain Reiner hired noted how bad this boat was. He said he was going to refund us, but haven't seen anything yet.....
3. The captain - first of all, we had read positive reviews of Tony on this site, but we were very disappointed in his work as a captain. Firstly, he made continuous racist comments and jokes during our trip. We understand that boat captains often have some good classic jokes, but these went well over the line! Secondly, he disregarded our comfort throughout the ride. The 7 of us on the ride all own boats and understand how rides cant always be smooth, but Tony sped through the channels and did not slow down for any of the massive yacht waves that we encountered despite us asking him to slow down so we didn't fly all over the place.

Reinier was easy to deal would definitely recommend renting his boat

Could have gone better, the radio was not working and he was late getting to the boat. The boat was otherwise fully functional the gps was a nice addition and we had a nice trip.

Reinier was great! I will definitely rent this boat again.

We had such a good time. Our Captain Tony, was very accommodating and we loved his personality. It was a perfect day. Thank you guys for helping to make our birthday trip to Miami special.

My friends and I had such a wonderful day on the boat thanks to Reinier! He did everything he could to ensure we’d have the best time even when we were dealing with inclement weather. He answered my questions in a timely fashion, and I felt very confident each step of the way. Captain Tony was also awesome as well! Very professional. Clean boat. Friendly. Looking forward to boating with them in near future!

The boat ran well, plenty of space for 8 people, logistics were easy to setup with Reinier, would definitely rent again!

Good service. We have a great time.
Very nice the captain.

My group and I had a wonderful time abroad this boat. It was clean and the Captain was very nice and friendly. Communication was also amazing. Any questions were answered very promptly. I would definitely book with Reinier again. Thanks you very much....

I would highly recommend booking with Reinier! He was very accommodating and answered all our questions. Everything was very easy to coordinate. Our captain was super polite and made sure we had a great time.

Reinier was great, very helpful, patient, and easy to talk to. His boat was fun to ride. Will definitely rent from him again

Reinier was very accommodating with all arrangements. Zack our captain was wonderful and we had an amazing day on the water. I would highly recommend Reinier and would definitely contact him myself again. We had 12 people and there was lots of storage and room on the boat for what we wanted to do. Great Day on the water!

We had a great day on the boat. Very clean and spacious.

Reinier was great, very knowledgeable and took to the time to go over everything before we departed. The boat is in very good shape, and it performed very well. Highly recommended!

Awesome service! Reinier made pickup and return a very pleasant and hassle free experience. The Monterey was a very fun, clean, safe boat. My next trip to Miami, my first call will be the airline, my second call will be to Reinier!

Outstanding service. Timely, professional and incredibly knowledgeable of the Miami waterways. The boat was spacious, quick and perfect for the full day cruise. Great experience. Not a flaw.

Excellent boat and guy to work with. The condition of the boat was impeccable, and the boat was the perfect size for a comfortable cruise around the miami bayside. Most of all, Rei was a pleasure to work with and he really made sure to go the extra mile so that my family and I could have a great day out in the water. Would definitely rent this boat again in the future, and would recommend it to my friends and family.

Reinier was awesome. Good communication and flexibility. The boat was perfect. Clean, ready and well maintained. Definitely will rent again from Reinier.

Reiner was great, the boat was clean and in good shape, he gave us several tips of places to go and go to handle the GPS.
I will rent with him on my next trip to Miami,

Boat is great, beautiful and clean. Owner is very friendly and helpful. One issue - check description before pay because they have some tricky payment - $160 which is not included in final price. Nothing on Reiner, he mentioned this additional charges in description but you might not notice them.
Everything else - perfect and boat in really good condition.

I would highly recommend booking with Reiner Lopez. He is extremely professional and easy-going. I believe we need more people like him on this planet. As for the boat, we used it for some offshore diving in less than optimal conditions and the boat performed better than expected. The boat had tons of storage for our massive amount of gear and it was very stable in rough waters. I originally booked a small center-console and Reinier recommended we take the Monterey instead and I am certainly glad we took his advice. Reiner, from the bottom of my heart.....thanks so much for everything.

very nice service. I ve never seen a boat with all security equipments on board. The boat was amazing too.

HIGHLY RECOMMENDED. We had an excellent experience booking from Reinier. It was my first time using BB and glad it went as smoothly as possible. The boat is in excellent shape, powerful and reliable motor, great sound system, and really spacious for easily 12 people. We took 8 and had lots of room on board - I told Reinier the picture's don't do it justice. Reliable rental, had an amazing time on the boat.. will def rent again

Reinier is one of the best people to work with on this website. Punctual, communicative and readily available. We had a great day on a beautiful boat that was reliable, clean and very well equipped. Will definitely work with him again! I highly recommend working with him

Best experience ever. The whole group had an amazing time!! Celebrating my friend's 21st birthday with Reiner was the best idea!! He was very friendly, laid back, and was more than welcoming. Will do again for sure!!